The Maserati Simun was a concept styled by Giorgetto Giugiaro when he worked for Ghia in the late 1960s as a replacement for the Sebring - a new 2+2. It never made it to production as another vehicle was chosen - the Indy developed by Vignale. In fact this was the last car that Giugiaro designed under the Ghia banner - he left soon after to create ItalDesign.

It was presented at the 1968 Turin Motor Show on the Ghia stand presumably to encourage buyers to influence Maserati to take this design over the Vignale one. However, Vignale had form - they had created the Sebring, so the Simun could have been a test to see what Giugiaro could come up with, considering he had also designed the first Ghibli.

The Sebring was powered by an inline six of 3.5 or 4 litres, depending on where in its life the car was built, however the Indy and the Simun used the tried and tested 4.2 litre V8 pushing out 256hp and this engine was also seen in the earlier Mexico and Quattroporte I cars. The styling showed hints of later cars - the Bora and Merak come to mind. To me it also has a hint of Matra-Simca Bagheera as well. As the Bagheera started development in 1970, it is quite possible that the French designers were influenced by Ghia’s earlier work. 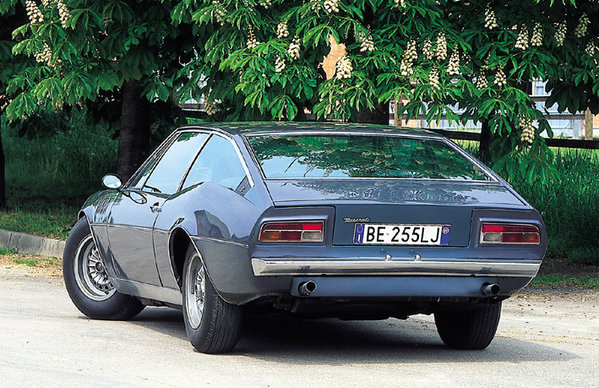 Only 1 Simun was built and it is now in the Maserati Museum in Modena run by the Panini family who saved the cars during the transition between De Tomaso and FIAT ownership. Some pictures show an orange car, however I think that it was resprayed at some point in its life having been modified - it was a test car after all.