I found this in an advertisement for an auction a while back through Automotive Masterpieces and as they described it, it was a mix of pre-war winning machines and post war race success! The AMP Special was powered by an engine by Alfa Romeo (A) on a Maserati chassis (M) and built by Placido Prete (P), hence the name. 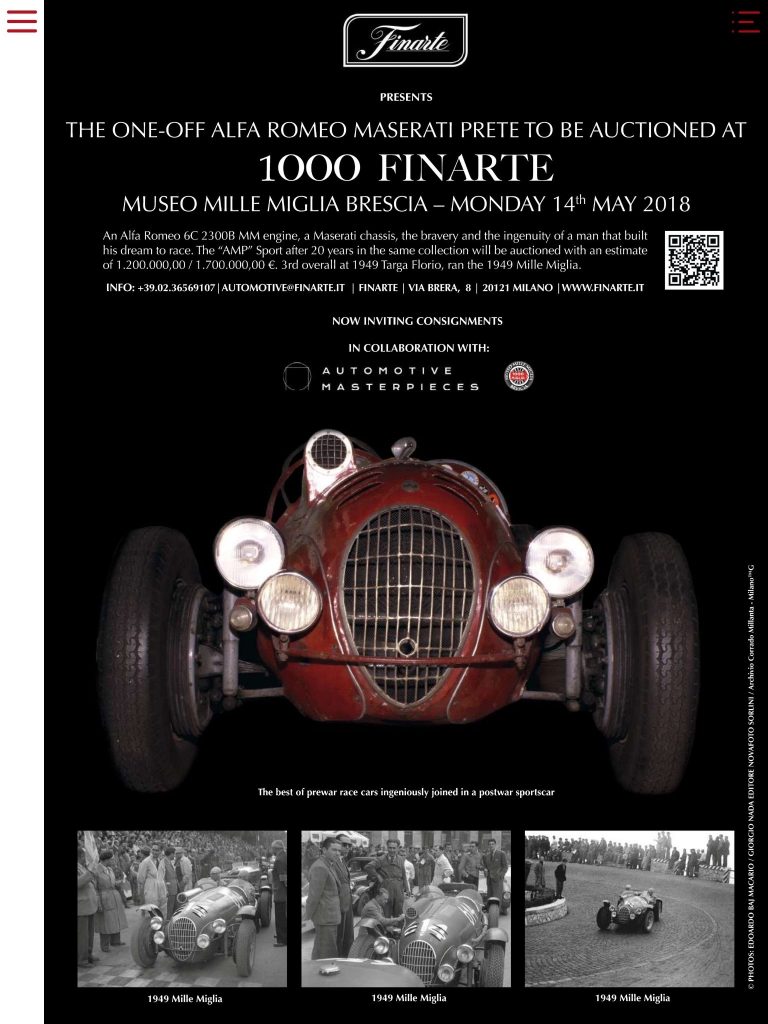 This is the description from Automotive Masterpieces:

"AMP" Sport: an example of bravery and ingenuity of the resourceful artisans in the immediate post-war period. A car with a pedigree: a chassis derived from racing Maserati components, an Alfa Romeo 6C 2300B MM engine, grown to even more power by Placido Prete, the maker of the car. 3rd place overall at the Targa Florio 1949: an exceptional result for an unofficial car. The Alfa Romeo Maserati Prete debuts with an 8th overall in the exhausting Grand Prix of Pescara 1948 and runs competitively until 1953, including the 1949 Mille Miglia and two Targa Florio.

This handicraft sports car was built in Rome after World War II by Placido Prete (hence the P in the name), installing an Alfa Romeo engine (the A of the name) 6C 2300B MM, brought to 2442 cc and fed by three double-barrel Stromberg carburetors of aeronautical derivation, on a tubular frame of unknown origin, using Maserati parts (the M of the name). Prete wanted to show his name on the car and so designed the emblem with the AMP initials against the backdrop of the Colosseum.

Prete's goal was to create a “Sport” car, so to be competitive in class, particularly in races like the Targa Florio and the Mille Miglia. The reworked Alfa Romeo engine produced 200 bhp, with a top speed of 240 km and was matched to its transmission. A powerful unit but reliable, above all. The frame and the Maserati components were in turn reworked and used to a tubular frame structure.

Entrusted to Giovanni Rocco, Italian Champion for “Voiturettes” drivers in 1937, the car made its debut in 1948, ranking eighth on the Circuit of Pescara, an exhausting test at the time for the cars and drivers, due to the high speed sustained for a long time. Rocco led the car into an intense participation in the sporting events of the time, often with worthy of note results, in class and overall. With Prete he competed in the 1949 Targa Florio - Giro di Sicilia, obtaining a third place overall: an exceptional placement already at the time, for a car that was not prepared and brought to the races by an official racing team. At the 1949 Mille Miglia the Rocco-Sorrentino team, even if sixth at the Rome check-point, was instead forced to withdraw before the check-point in Pescara. Great commitment but little luck even at the 1950 Gran Premio di Napoli. Later, Francesco Santovetti bought the car from Prete, but continued to share the steering wheel with Rocco, who in 1952 was first in the Coppa dei due Laghi. Santovetti instead was third at the Vermicino-Rocca di Papa. In 1953 the car, led by Scarlatti, was second in the Coppa dei due Laghi. There are thirteen races “certified” by evidence, in the career of the Alfa Maserati Prete, but the history is certainly richer and the historical researches in progress are checking the other races reported.

Throughout its history, the car underwent several bodywork variants: from two to four headlights, with wraparound, partial or missing mudguards, with air intake on the hood or without, with or without windshield for the passenger.

The Alfa Romeo Maserati Prete is now listed both in the Alfa Romeo and Maserati registers and features a thirty-year career in re-enacting competitions. 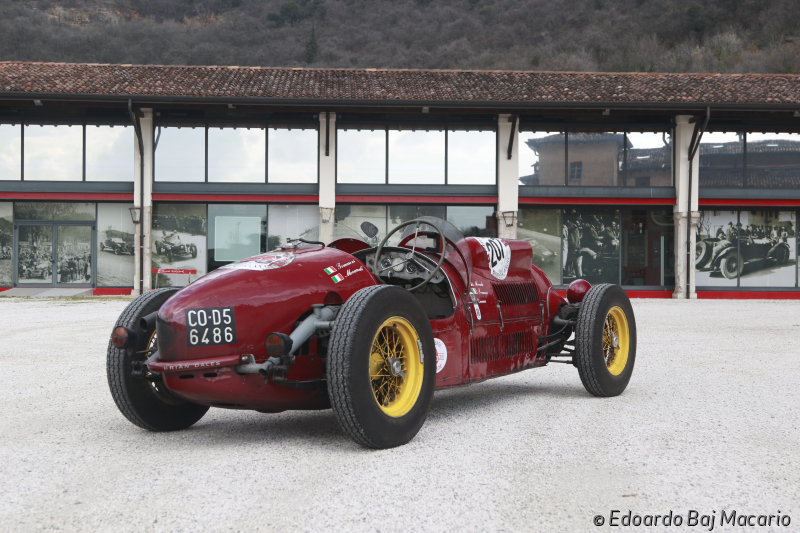 Since publishing this article, club member Colin had seen this race car when he was attending the 2018 Mille Miglia, although he said that it was in the courtyard with no information about it - he assumed it was simply an Alfa Romeo, thanks to the badging. He took these three photos: 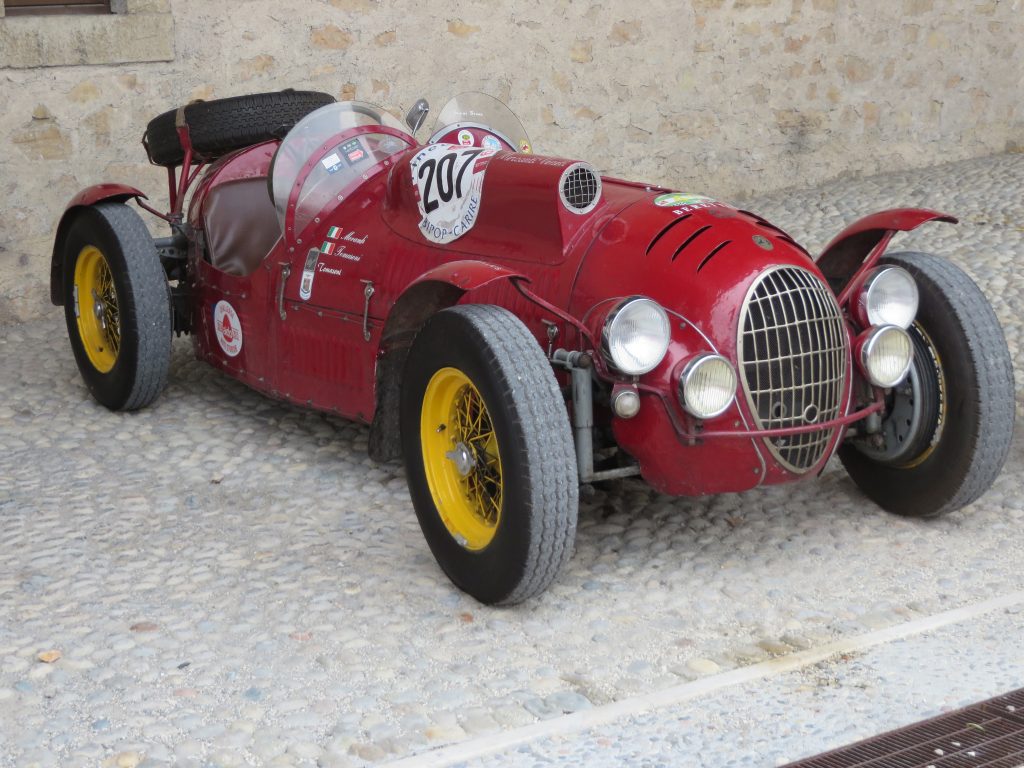 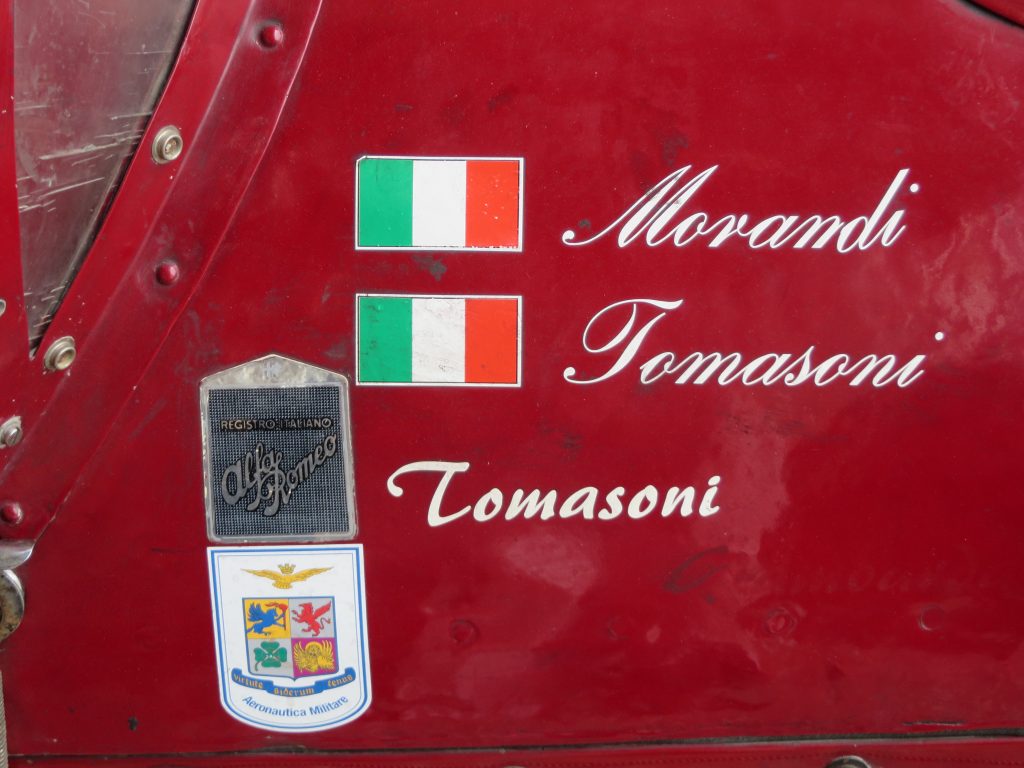 AMP Special in 2018 at the Mille Miglia. Photo by Colin A. 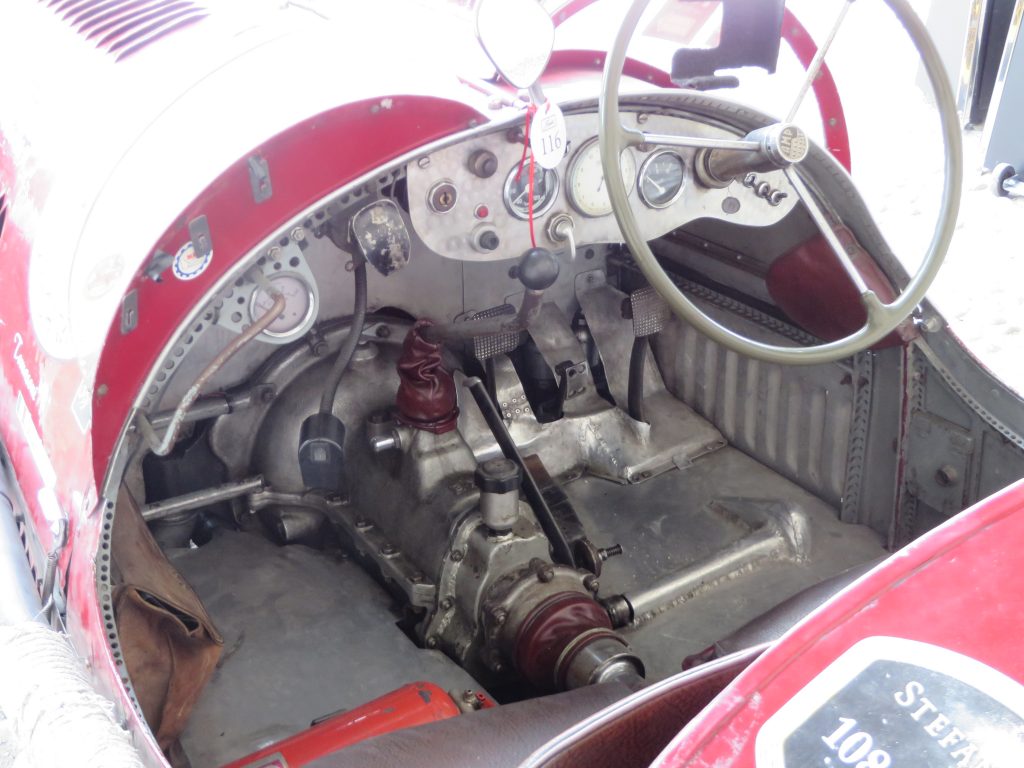 The AMP Special Cockpit. Photo by Colin A.