This advertisement appeared in the January edition of Octane magazine. The Bonhams Scottsdale auction was a success with this particular car selling for US$2,755,000 including premium. The car was built by Carrozzeria Frua in 1952. 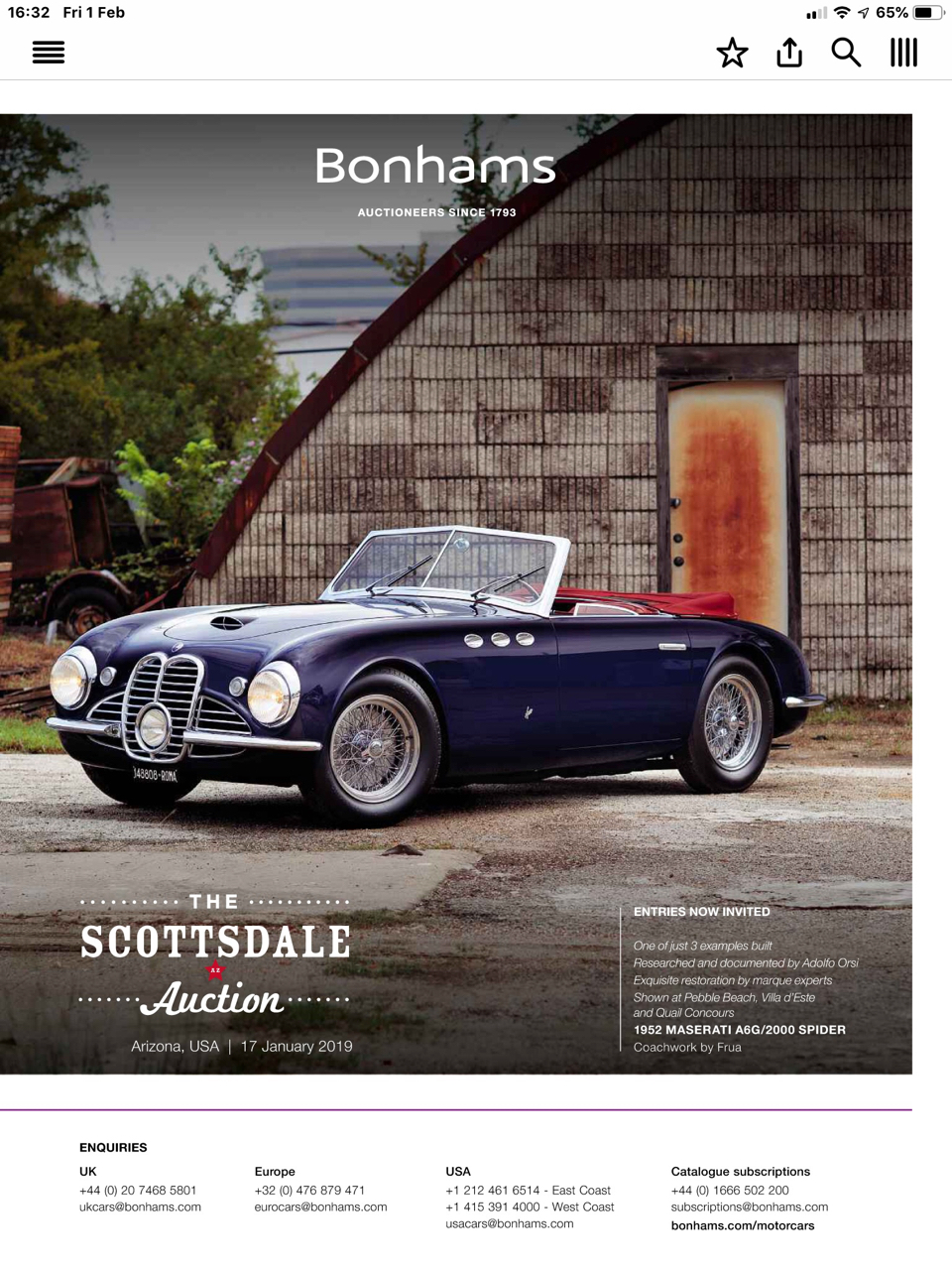 This is the description from the Bonhams catalogue:
"Maserati A6G/2000 Chassis number 2017 is one of just three short-wheel base Frua Spiders built and as such is exceedingly rare, plus it comes with a well-documented and quite remarkable history. According to a thorough investigation by renowned Maserati historians Adolfo Orsi Jr., chassis 2017 was delivered to Carrozzeria Pietro Frua on July 24, 1950. Six months later it emerged with its new bespoke, hand-built Spider coachwork and it was returned to the Maserati factory to receive its final fit and finishes. Dressed in dark blue, the finished A6G/2000 was delivered to Maserati dealer Mimmo Dei of Rome on May 17, 1951 and immediately sold to its first caretaker, Luigi Trevisan, one of the many professionals working in the movie business. Almost exactly a year later, 2017 was acquired by Franco Di Stefano, also involved in the movie business, and resided in Rome for another two years.

Around 1957, the car was exported to the USA and records show that it was purchased by Gene Tice of Santa Monica, California in 1957. Mr. Tice retained the car for several years: at some point it was fitted with a Corvette V-8 engine, a common praxis in those years for rare, refined Italian sportscars. Then in the early 60's it appears the car was offered for sale and sold to Robert P. Yorba of Cambria, California, and was registered on California black plate 'OAZ 434' in Newport Beach, California.

According to Yorba's daughters, Robert raced the car in SCCA events across the USA, until it was eventually stored in Yorba's garage and dropped off the radar for some time until serendipity played its hand. Fast forward to October, 1997 - a group of European collectors were lunching in a Californian diner, discussing their most recent automotive escapades. The waitress, Dee Dee, happened to overhear their conversation and announced that she was the owner of a rare Italian automobile. With predictable scepticism, the group enquired about the car and were told it was a Maserati. Amused and acutely sceptical still, the group asked to see the car and soon found themselves standing in the door of a one-car garage staring at the rear end of a Maserati A6G/2000 Frua Spider. Dee Dee Yorba explained that her father had purchased the car in the 60s and raced it until finally he retired and the car was stored in his single car garage and eventually inherited by his two daughters. Naturally the car enthusiasts attempted to purchase the Maserati but Dee Dee insisted she had to consult with her sister, who was somewhat unenthused to part with her father's legacy.

The discovery of the A6G became the stuff of legend and was soon penned in "Classic & Sports Car" magazine along with the contact information of the Yorba family. Inundated with enquiries, the sisters remained stalwart until, after three years of negotiation, the car was sold in the year 2000 to its current owner – a prestigious collector of some of the rarest and most significant Maserati motorcars.

In December 2001, the A6G/2000 was shipped to Modena where it was assigned to Dr. Adolfo Orsi Jr., a venerable historian and expert on the Maserati brand, and nephew of the Maserati president, when the car was manufactured. After an historical research, he coordinated a first class no expense spared restoration, with the involvement of the best shops in Modena area: Carrozzeria Brandoli (for the body), Officine Candini (for the mechanics), Carrozzeria Cremonini (for the paint) and Interni Maieli (for the upholstery).

At the same time the collector purchased the remains of chassis 2013 - the first A6G/2000 built with the Pinin Farina Coupe body and shown in the 1951 Turin Motor Show – with the express intent of using the engine for the Frua Spider. The engine no. 2013 was of noble roots, having raced in the 1948 Mille Miglia in an A6GCS "Monofaro" chassis #2004, driven by Amendola/Bai. The Maserati was running fourth in the race when a tragic accident cost Bai his life. The A6GCS was dismantled and its engine no. 2004 was fitted on the new Pinin Farina Coupe #2013, and renumbered accordingly. It should be noted, that it is believed the original engine no. 2017 is currently installed in an A61500 Pinin Farina in Italy.

Meanwhile, Orsi set about locating as many original parts as possible for the Frua Spider, including the housings for the original transmission and differential. Those parts which were impossible to source – such as the grille and bumpers which had been changed over the years - were remanufactured from molds of the original set of the Frua Coupé #2028, then in California. Every aspect of the A6G/2000 Frua Spider was addressed and completed factory correct and concours standards, the results of which are evident upon close and expert inspection.

The car emerged four and half years later, graced with a correct true blue-blooded A6G/2000 motor. The Maserati immediately won in 2006 the Trofeo Ruoteclassiche - the award for Best Restoration at the Concorso d'Eleganza Villa d'Este on the shores of Lake Como. In the September 2006 issue of the Italian magazine "Automobilismo d'Epoca" a 16 page article was dedicated to the restoration of the car. In 2010 chassis 2017 was invited to the renowned Quail Concours – A Motorsports Gathering, and, competing against 45 cars, won Best in Class for Post-War Sports Cars, at the presence of Dee Dee and her sister. More recently the Frua Spider won third place in the Maserati Centennial Coachwork Class at Pebble Beach Concours d'Elégance in 2014.

This superb Maserati is accompanied by various documents, including copy of the original factory invoice dated May 17, 1951, listing all the extras which came with the car such as the tool kit, six extra spark plugs and five 16x400 wheels with Pirelli tires.

The exclusivity, extraordinary history, sublime condition and rarity of this 1951 Maserati A6G/2000 Frua Spider mark it as an international celebrity, and it would surely be welcomed again at the most prominent Concours d'Elégance or driving events around the globe. Thus, we are proud to present one of most beautiful and valuable jewels in the Italian automotive crown ever to be offered at auction."