It was a beautiful Sydney Sunday and the Maseratis roared north to muster at the Cowan Truck Stop after various coffee pick-ups along the way.

Things started out normal as the cars rolled in and then a BMW Z4 rolled up and out pops Colin; ‘just shuffling cars he stated’, had a chat and then left for Umina.

Next the Volvo arrived and of course it had to be Don Crutchley; ‘just coming for the drive announced Don’ and proceeded to mingle with the group and catch-up.

The time arrived and our President led the group along the old pacific highway with a warning during the briefing to watch out for pot-holes, cyclists and fallen trees and rocks, we encountered all on the route north.

We arrived safely at Staples Lookout and the view was spectacular, it was such a clear day you could see Pittwater. A Porsche 968 rolled in and out pops Colin again ready for the next leg to lunch.

A fruit seller was trading at the lookout and so a number of Maserati boots filled with fruit and vegetables.

It was time again and so we set off for The Springs with the President leading, just as we got to the turnoff to our destination the Leslies’ arrived from the Upper Hunter to join the final leg of the run

Parking was plentiful and the view from the restaurant over the landscape and the 18th golf hole made for a pleasant outlook.

Our long table enjoyed a three course meal with drinks and much conversation, we welcomed to Mark Fabian as a newish member, and heard stories of Alan’s yacht stuck in NZ because of Covid.

When the time came to depart half the group retreated to the balcony for coffee and extra conversation late into the afternoon.

Sitting Duck had lived up to its reputation, another great Maserati event. 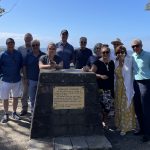 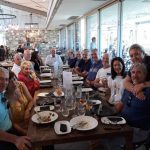 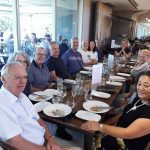